Vietnam’s surging economy and increasing attractiveness as a place to do business have raised its profile in Southeast Asia. Its turn at hosting the Asia-Pacific Economic Cooperation leadership summit now offers the country the opportunity to further burnish its image. But that opening has also come with risk. Having a relapse of the avian flu outbreak that hammered the country in 2003 would not only take away the shine, but doubly affect its image under international spotlight. Despite advances in its economy, however, Vietnam remains a primarily rural and agricultural society, heavily dependent on animal husbandry. Pre-emptive measures to prevent an outbreak, such as vaccination campaigns and the slaughter of vulnerable poultry populations, have been fraught with difficulty. Without strong economic incentives and alternatives for the country’s farmers, Vietnam’s government cannot hope to attack the problem on a grand scale. With luck, the APEC Summit viewed as Vietnam’s coming out party will not be ruined by an outbreak, but its ability to prevent a fresh outbreak that has the potential of a pandemic remains to be seen. – YaleGlobal 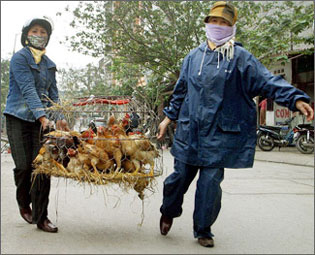 Burden of a host: Wary about fresh outbreak of Avian flu before APEC Summit, Vietnam cleans up market

HONG KONG: In preparing to host its first Asia Pacific Economic Cooperation leader's summit in mid-November, Vietnam worries about one cloud that could cast a shadow over the event: an outbreak of avian influenza.

With 93 human cases resulting in 42 deaths since 2003, Vietnam has been the country hardest hit by avian influenza. But the government has also succeeded in controlling the disease over the past year through a combination of vaccination, surveillance, public-information campaigns and the prompt culling of infected flocks. As the winter flu season approaches, health officials worry about fresh outbreaks, particularly with 21 world leaders gathered in Hanoi for the summit.

“We have the APEC meeting in November, and winter is also coming up, so we are very active in trying to ensure we have no cases,” said Bui Quang Anh, director of Vietnam’s animal husbandry department, which carries out H5N1 vaccination programs for 200 million odd chicken and ducks.

Since human cases of avian influenza are always preceded by outbreaks in poultry, Vietnam’s strategy has been to use vaccination to prevent the spread of the virus through these birds. Nearly 80 percent of Vietnam’s poultry is raised in backyard farms, however, making mass vaccination a major logistical challenge. In 2005, it managed to vaccinate 160 million poultry out of an estimated population of 250 million. This year though, the vaccination effort has been less successful. Only 140 million birds, roughly 65 percent of the poultry population, have been vaccinated so far. Fewer people are coming forward to get their birds vaccinated. Anh attributes this decline to the very success of the programs. “This year there have been no cases, and so people ignore the call to get their chicken and ducks vaccinated.”

A major risk factor for Vietnam is the country’s large domestic duck population. While public attention tends to focus on chickens as the main carriers of avian influenza, ducks are far more likely to harbour the virus, often without showing any symptoms. Ducks and other aquatic birds are natural reservoirs for influenza viruses such as H5N1, and though they do not themselves fall ill, scientists suspect they act as silent transmitters, passing the virus on to chickens and humans. “Ducks are not a source of illness, but they are very dangerous for transmission.” says Pham Ngoc Dinh, vice director of the National Institute of Hygiene and Epidemiology in Hanoi. “We believe there is a very high rate of infection among ducks.”

Vietnam has banned farmers from breeding fresh stocks of ducks until next year. But the birds are economically important in the country. Raising ducks and chickens is a major source of income for rural families, and without alternatives, a more permanent ban on raising ducks could be devastating. “We would like to limit the role of ducks in transmitting the virus, and stop ducks form being raised in fields where they wander around,” said Anh. “But we need to first either develop alternate models for raising ducks, or find other employment and income for people.”

Nguyen Mau The’s farm in Bac Ninh province, a hour’s drive northeast of Hanoi, vividly illustrates the vulnerability of Vietnam’s small farms. The wiry 60-year-old war veteran raises ducks, chickens and pigs on a small patch of land adjoined by two ponds, once craters left by US bombs during the Vietnam War. Throughout the country, farmers fill such craters with water and use them to breed ducks and fish.

Nguyen has 20 ducks, some paddling in the water, others waddling around the pond’s edge. He also has 100 chickens running free on the farm, some scratching and clucking near the pond. In a long concrete shed, the farmer has a third source of income: 20 large pigs snuffling around in their stalls. The chicken, ducks and pigs provide an income that leaves Nguyen among the better off in his village.

But this mixture of birds and animals is a nightmare from the point of view of preventing avian influenza. Since the ducks and chickens are not segregated, infected ducks can easily pass the virus to chickens through their faeces. More worrying still is the presence of the pigs. Pigs are a mixing bowl in which new forms of the influenza virus can be created. They are susceptible to both human and avian strains; when the two strains meet, they can swap genes and create a new form of virus. The viruses that caused the influenza pandemics in 1957 and 1968 are believed to have resulted from this process of genetic re-assortment between avian and human viruses in pigs.

In 2004 Chinese researchers reported a few cases of pigs infected with H5N1. A year later an international team of scientists experimentally infected pigs with H5N1 to see how susceptible the animals were to the virus and how effectively they pass it on. They found that the pigs could indeed be infected with H5N1 and develop the disease, though they did not pass it on to other pigs.

The danger this coming winter, with the flu season at its peak and human influenza viruses circulating, is that pigs could get infected with both the normal human H3N2 virus and the avian H5N1 virus, leading to the creation of an influenza virus that could start a pandemic. If humans are inoculated against regular seasonal flu viruses, the risk of the human and avian viruses meeting and mixing is reduced. But Vietnam does not have a policy of requiring people to be inoculated. “People should get vaccinated,” explains Dinh of the National Institute of Hygiene and Epidemiology, noting that the vaccine is not manufactured in Vietnam and is therefore expensive. “The government encourages people to get vaccinated, but it costs about US$10 a dose, and people cannot afford it.”

Vietnam’s only strategy to prevent the H5N1 virus transmitting from ducks to chickens and pigs and ultimately humans, is vaccination of poultry. Teams of government vaccinators have been dispatched to backyard farms across the country to immunize chickens and ducks. Village-level community organizations have been drafted into the effort to spread the message to farmers that they must protect their flocks. But a shortage of trained vaccinators, the difficulty of reaching remote areas and a lingering reluctance among farmers have left gaps in coverage that need to be filled if Vietnam is to remain H5N1 free.

The APEC summit is the most high powered gathering of world leaders that Vietnam has hosted, and along with the nation’s entry into the WTO next year, is a sign of its increasingly successful integration into the global economy. But the impact of this debut on the world stage will be marred if it is followed by outbreaks of bird flu. Vietnam is determined to see this does not happen. “If need be, we will apply very drastic measures to see that everyone vaccinates their birds,” said Anh of the Animal Husbandry Department. . He is optimistic that he will succeed . “We’ll try to do our best, and if you try to do your best, you will get results.”

Thomas Abraham is director of the Public Health Media Programme at the Journalism and Media Studies Centre, the University of Hong Kong, and the author of “Twenty First Century Plague, The Story of SARS.”