Wage inequality thrives on secrecy. Members of society have some insights: some positions pay minimum wage, teacher and government salaries are public information, and annual reports disclose CEO salaries and benefits. It’s no coincidence that Norway, Sweden and Finland are societies with greater equality and “every taxpayer’s annual income and tax payments are transparent,” explains Carlos Amato for New Frame. Scandinavian tax authorities have published incomes since the 18th century. Norway launched its online database in 2001, with anonymous searches allowed. Then in 2012, the database required log-ins with notification to targets, prompting a steep decline in searches. Analysts in South Africa debate the need for transparency, with one noting that Scandinavia’s high taxes and redistribution reduce inequality rather than inequality. Amato concludes that societies could first target those who fail to pay taxes. – YaleGlobal

Read the article from New Frame about income inequality.

Carlos Amato is an editorial cartoonist, writer and illustrator living in Johannesburg, with a focus on sport, culture and politics. He has degrees in literature and animation, used to edit the Sunday Times Lifestyle magazine and is the author of Wayde van Niekerk: Road to Glory (Jonathan Ball, 2018).

This article was first published by New Frame. 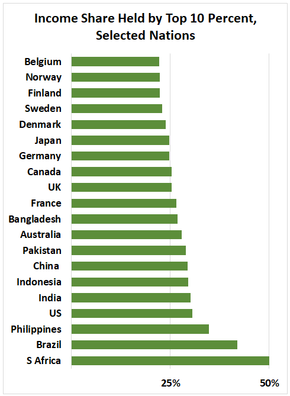 Income Inequality: Too Big to Ignore

Capitalists, Arise: We Need to Deal With Income Inequality