Why Billions Do Not Have Glasses: BBC

As many as 2.5 billion people worldwide need but do not have eyeglasses. The Vision Council of America suggests that 75 percent of adults need eyeglasses to read, drive and work. Glasses, often taken for granted in developed nations, support worker productivity and safety. Yet millions worldwide lack access to eyewear. “And many of those people may have no idea glasses could help them,” explains Tim Harford for BBC News. “Still, even conservative estimates put the economic losses from poor eyesight into the hundreds of billions of dollars - and that's before you think about people's quality of life or children struggling at school.” Harford describes the evolution of eyeglasses, beginning with their invention in the late 1200s, most likely in Italy, to modern-day digital glasses and augmented reality that allow precision work and increase worker productivity. Researchers tested vision of hundreds of tea-pickers in India and distributed inexpensive eyeglasses: 20 percent more tea was picked, with productivity higher among older subjects. Studies suggest that teachers often provide early alerts and trained nurses could test vision to provide eyeglasses. Harford concludes that 13th-century technology should be widely available.” – YaleGlobal

Why Billions Do Not Have Glasses: BBC

About one out of three people worldwide need, but don’t have eyeglasses that are essential for education and contribute to labor productivity and safety
Tim Harford
Saturday, November 23, 2019

Read the article from BBC News about 2.5 billion people in the world who cannot afford or access  eyeglasses. 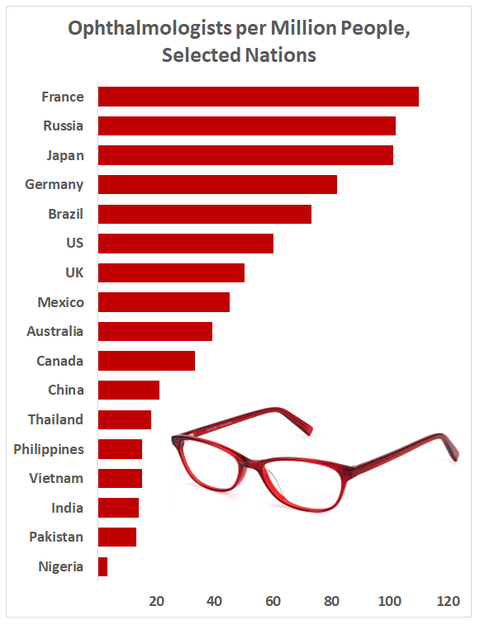 Unclear: About 2.5 billion people worldwide need eyeglasses, yet availability of eye doctors as reported in most recent year by health officials, varies with low numbers in low- and moderate-income regions  (Source: Visual Atlas)