Why the French Love Their Farmers

French President Jacques Chirac has admitted to a "profound malaise" in the country that led to the recent rioting, but French policy on farm subsidy is emerging as another source of malaise within the European Community. Policymakers all over the world are calling for great reductions in EU farm subsidies, since such reform would help stave off budgetary crisis as well as bring EU countries closer into line with WTO rules. But France, the greatest beneficiary of the EU Common Agricultural Policy (CAP), is extremely unlikely to reduce its agricultural subsidies without a fight. As Brookings Institution experts Philip H. Gordon and Nicolas de Boisgrollier write, the influence and popular backing of the French farming community are deeply rooted and very powerful. The lucrative nature of France's CAP benefits, the popular depiction of farmers as "keepers of the countryside," national pride over France's gastronomic culture, disproportionate rural electoral power and sympathetic politicians are among the factors which have made French farmers a formidable lobby. As a result, should the EU attempt to reduce common subsidies, the French are likely to demonstrate an intransigence, similar to that which they demonstrated when they rejected the EU constitution in May. With elections in 2007, French politicians are unlikely to risk a backlash by coming out in favor of subsidy reductions - meaning that the road to EU-wide reform is likely to remain blocked by an enormous obstacle. – YaleGlobal

Why the French Love Their Farmers 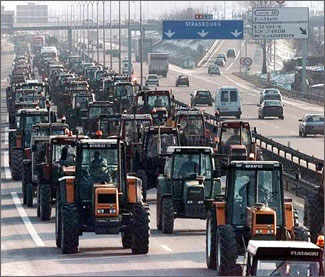 Roadblock to free trade: French farmers ride their tractors from the EU headquarters to Paris, protesting proposed changes to the Common Agricultural Policy

WASHINGTON: In recent weeks, the eyes of the world have been on France due to the violent rioting in its suburbs. However, another issue with the potential to create major unrest in France lurks beneath the surface, and may soon become the object of global attention. Pressure from the United States, Britain, and other countries to cut agricultural tariffs—seen as key to a successful World Trade Organization (WTO) agreement and to breaking the European Union (EU)’s budget stalemate—risk leading to a major backlash in France. When EU Trade Commissioner Peter Mandelson earlier this month responded to an American offer to cut agricultural tariffs by 75 percent with a proposal to cut European tariffs by an average of 46 percent, French leaders from across the political spectrum denounced even that low level of cuts as “unacceptable.” Gaullist party leader Nicolas Sarkozy spoke for many in France when he declared the proposed U.S.-EU agreement to be a “fool’s deal,” and vowed to never accept it. 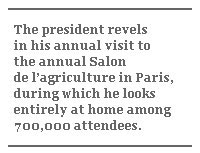 France’s attachment to the EU’s Common Agricultural Policy (CAP) is longstanding and well known. The CAP was part of the original “deal” at the foundation of the European Union whereby France agreed to open its industries up to German competition in exchange for Germany’s promise to allow France to shelter its large farms from global market forces. Under the CAP, Europe eventually became not only self-sufficient in agriculture but a major exporter of food products. The CAP also helped harmonize social and political relations in the EU, even though European consumers had to pay more for their food as a result. Over time, however, the CAP has become so costly to maintain that some of France’s EU partners—to say nothing of other agricultural producers like the United States, Australia and the developing world—have insisted on reform. In 2003, France and its European partners agreed to replace most production-linked subsidies with direct income support, but pressure for more reform has not abated. And with France's 2007 presidential and parliamentary elections on the horizon, British and American efforts to isolate France on this issue could lead to an ugly crisis.

Why do the French feel so strongly about their farms? Forty years ago, when more than 20 percent of the French population still worked on the land, the attachment to agriculture was understandable. But with only 3.5% of the French now in farming, why are the French still so attached to it? Why do the other 96.5% not see that agricultural subsidies and tariffs only make their food more expensive and undercut the livelihoods of farmers in the developing world that France maintains it wants to help?

The most direct answer to this question is that the CAP has been very profitable for France as a whole. Even after the recent cuts, the French agricultural community still receives 9 billion euros (over $10 billion) per year through the CAP. Even though other countries (like Germany, Britain and the Netherlands) are greater net contributors to the overall EU budget, France receives the greatest share of CAP spending, which itself still represents 40% of the overall EU budget.

The French farming community that receives this money is powerful and effectively represented by the main agriculture union, the FNSEA. This union has become even more aggressive in recent years to avoid being outflanked by a new competitor, Confédération paysanne, a radical rural organization for which the anti-globalization campaigner José Bové (of McDonald’s ransacking fame) was a longtime spokesman. In a country that has a conflict-prone social culture (and where politicians are known to cave in the face of the frequent protests and strikes), farmers are among the most determined, and sometimes violent, lobbies.

Beyond the unions and street protests, the rural community has significant political influence—especially in the French senate. As senators are elected by local officials—from France’s 36,000 communes—the countryside is overrepresented.

Another important factor in France’s tough stand on farming is President Jacques Chirac himself. Chirac, the longtime representative in parliament of Corrèze—a poor, agricultural département—started his political career as a minister for agriculture and has long been personally sympathetic to farmers. The president revels in his annual visit to the annual Salon de l’agriculture in Paris, during which he looks entirely at home among 700,000 other attendees as he samples French regional products in front of TV cameras.

Even powerful unions and a sympathetic president, however, cannot fully explain the power of the French farming lobby. For farmers in France have tremendous sympathy from the rest of the population. Traditional, high-quality food remains an important part of French culture, and France’s defense of its “gastronomical sovereignty” is itself a tradition. Defenders of French agriculture like Bové argue that globalization of the agricultural market has not only made France susceptible to bad-tasting food (la malbouffe) but also to unsafe food, mad cow disease, hormone-treated beef, genetically modified organisms and preservatives—arguments which are very convincing to many French.

But it is not just about food. French farmers are also considered the keepers of the countryside. Most French citizens—who often think of themselves as having rural roots even if their families have lived in Paris or Lyon for generations—sympathize with the local communities that fight against the closure of their post office or elementary school. With 30,000 farms disappearing every year, the French are worried that their countryside will soon empty and progressively die. In reality, with half of EU subsidies going to just 10% of farms, it is far from clear that the CAP helps preserves villages (as opposed to large industrial farms), but the argument still carries weight among the French. 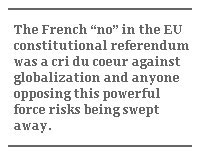 France has never shied away from protecting its interests when it comes to agriculture. In 1965, under President Charles de Gaulle, France practiced the policy of the “empty chair” in part to manifest its unhappiness with the way the then European Community’s agricultural policy was evolving. By doing so France preserved the veto that it has used ever since to defend agricultural spending. In 1992, when farm supports were once more threatened by a proposed EU deal with the United States, France again threatened a veto and provoked a major transatlantic and intra-EU crisis.

Today, given that the run-up to the 2007 elections has already started, and considering the power of the agricultural lobby as well as the national sensitivity of the issue, France should not be expected to easily go much beyond the last EU agreement on the CAP that runs until 2013. The French “no” in the EU constitutional referendum last May was widely seen as a cri du coeur against globalization, and any French political leader who stands up in the face of this powerful force risks being swept away. American and European negotiators should keep making the case that European agricultural subsidies distort world markets and that there are other ways to preserve the French countryside than to pay farmers to produce food on them that nobody needs. But if they try to push it too far and to directly challenge the French farming consensus, they had better be prepared for the reaction.

Philip H. Gordon is Senior Fellow and Director of the Center on the United States and Europe at the Brookings Institution. Nicolas de Boisgrollier is a Visiting Fellow in the Center’s France Program.