Before summer of 2008, India and Pakistan were gradually normalizing relations and edging toward agreement on territorial claims in Kashmir. But the longstanding dispute, in play since Pakistan separated from India, remains a live issue for politicians and extremists in India and abroad, to exploit and throw a spanner in the works for the country’s global ambition, suggests Harsh V. Pant, professor and security analyst with King’s College London. India is 80 percent Hindu and 13 percent Muslim. The state of Jammu and Kashmir is the only one with a Muslim majority, and after years of supporting armed struggle, its Muslim citizens pose a novel challenge with a non-violent movement seeking independence form India and closer ties with Pakistan. Pant writes that granting Kashmir independence would fuel other separatist movements in the world’s largest multi-ethnic democracy, but attempts to suppress the demand by force might bring violent attacks in other parts of India, like the recent spate of bombings in major cities including ones in New Delhi on September 13. Pant concludes that “resolution of the problem that acknowledges aspirations of the Kashmiri people while sustaining the idea of India as a multicultural, multiethnic secular liberal democracy is vital not only for India’s global vision but also for a globalizing world order in search of a ‘dialogue among civilizations.’” – YaleGlobal 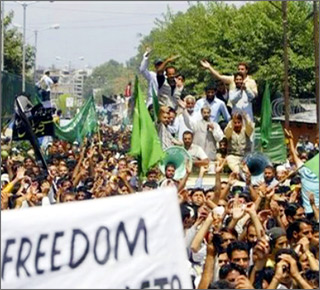 freedom and Islamic violence in the country pose new dilemma for

LONDON: With dramatic deterioration of India’s internal security and unprecedented popular uprising in Kashmir, the nation’s ambition to emerge as a global power meets new challenges. Against the backdrop of recent terrorist bombings in New Delhi by the so-called Indian Mujahideen lies the deteriorating situation in Kashmir, where much of the population is engaged in an emerging Gandhian non-violent struggle for an independent Islamic state, closely allied with Pakistan. Facing non-violent protesters in Kashmir and armed attack by faceless terrorists inside the country, India’s government finds itself in unknown territory.

To get this problem off its back and focus on its global-power aspirations, India may have to adopt policy that invites international approbation, but unravels the country’s domestic balance. The question remains, Is India's quest for global power destined to remain unrequited because of a pesky domestic problem with regional dimensions? 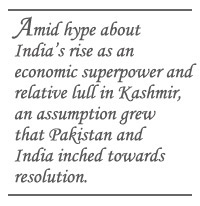 Amid all the hype about India’s rise as an economic superpower and relative lull in Kashmir in recent months, an assumption grew that Musharraf-led Pakistan and India were inching towards tentative resolution. The assumption was not idle. The governments of India and Pakistan were supposedly talking regularly, and former President Pervez Musharraf had publicly made a commitment to the international community that he would get rid of the jihadi elements in his military and intelligence services. Meanwhile, the region of Jammu and Kashmir in India enjoyed two rounds of democratic elections, deemed reasonably free and fair. The tourists were returning to the idyllic Kashmir valley, and the separatist elements found themselves isolated.

And then last month the spell broke over a minor land dispute and maneuvering by Indian politicians, especially the Hindu nationalist, Bharatiya Janata Party, for tactical political gains against the ruling Congress. The Hindu nationalists whipped the Hindus of Kashmir into a frenzy; leaving the field wide open for the separatist rabble-rousers. The government responded predictably by saturating the streets with its military prowess. The chants of “azadi,” or “freedom,” once again ring in the streets of Kashmir, and the flags of Pakistan dot the valley’s landscape.

While the Hindu nationalists provoke the Hindus in Jammu, further widening the chasm between the religious communities in the region, and while Hindu-Muslim communal lines harden in Kashmir, many members of the liberal intelligentsia in New Delhi have started wondering if the time has not come to give in to the demands of those who want nothing to do with India. A sense of fatigue over the issue of Kashmir has prompted suggestions that Kashmir should be allowed to secede. Some point out that the costs of holding on to Kashmir are far too great even as others suggest that India should not be a colonizer, ruling people against their will. In a characteristically provocative essay, celebrated author-turned-activist, Arundhati Roy went farthest suggesting, “India needs freedom from Kashmir as much as Kashmir needs freedom from India.”

It’s important to recognize that the Indian state, for all its many faults, is not the only guilty party in the Kashmir imbroglio. The saga of Kashmir is one of competing nationalisms and political philosophies. On one hand, the Indian government continues to champion Muslim-dominated Kashmir as a symbol of India’s secular democratic ethos and fails to acknowledge that a majority of Kashmiris have ceased to view themselves as Indians. On the other, the separatists who want the right of self-determination refuse to account for the aspirations of the Hindus and Ladakhis as if they’re not a part of this dispute at all. 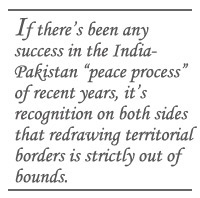 Both the conservatives and the liberals in India fail to grasp the complexities of Indian and Pakistani interests in Kashmir and refuse to reckon with the long-term consequences of their supposed “solutions.” Clearly, no Indian government is in a position to allow Kashmir’s secession from India for fear of triggering a new spate of separatist struggles in the multi-ethnic, multilingual nation. India’s democracy and secularism would receive a body blow if India with the world’s second-largest Muslim population accepted the idea that a Muslim majority in any state could secede.

In fact, if there’s been any success in the India-Pakistan “peace process” in the last few years, it’s been recognition on both sides that redrawing territorial borders is strictly out of bounds. Moreover, broader geopolitical ramifications of an independent, landlocked Kashmir remain dependent on the kindness of its neighbours. India, Pakistan and even China would try to enhance their own strategic interests and compete for the loyalty of Kashmir.

It’s not readily evident that an independent Kashmir would be less a bone of contention between India and Pakistan than the present state of affairs is. Islamist extremism would get a boost worldwide even as India, already under assault from rising Islamist fundamentalism, would find it difficult to manage growing tensions between Hindu extremists and Islamist radicals. It’s no exaggeration to suggest that it would be the end of India as the world has come to know. As it is, India’s disaffected Muslim youth, possibly in league with militants in neighboring countries, have stepped up terrorist attacks in the country’s key economic and political centers. Most audacious attacks have been against Indian parliament and, most recently, coordinated bomb blasts in the capital. Deterioration of the Kashmir situation can only worsen terrorist attacks within. 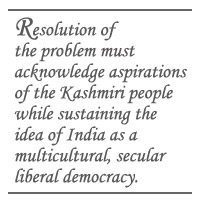 The turmoil in Kashmir has brought to the fore the fragile state of domestic affairs in India. The world media and India’s elite talk about India’s rise, often not realizing that the state – beset with rising Islamist extremism, Maoist insurgency, and growing and conflicting demands of myriad interest groups – is rapidly losing ability to have its writ run over a large swathe of its territory. The very idea of India is under siege from different quarters with a significant erosion in the legitimacy of the Indian state. Though the Indian economy has continued to grow despite Kashmir and other internal security challenges and foreign investors have not yet been discouraged by sporadic terrorist attacks, the Indian economy may soon face the consequences of the grim security situation if investors find the Indian state too weak to wield due authority within its borders.

A liberal democracy, India must acknowledge the aspirations of the people of Kashmir. But it’s equally true that all other stakeholders are invested in the conflict. The separatist leaders, the mainstream political parties in Kashmir and, above all, Pakistan can play the role of a spoiler the moment they see their own interests sidelined.

There’s little likelihood of this conflict getting resolved anytime soon, and the trouble for India is that its heavy-handed effort to keep the lid on Kashmiri demand will continue to besmirch its reputation as the world’s largest democracy and a claimant for global leadership, including a permanent membership of the UN Security Council.

Yet, despite talk among liberal intelligentsia in India, independence for Kashmir is not in the cards. But a resolution of the problem that acknowledges aspirations of the Kashmiri people while sustaining the idea of India as a multicultural, multiethnic secular liberal democracy is vital not only for India’s global vision but also for a globalizing world order in search of a “dialogue among civilizations.”