The World Looks to Obama – Part I

Tackling global challenges is nearly impossible when the world’s sole superpower – the largest economy, the largest user of energy, the most powerful nation technologically – does not pitch in. A YaleGlobal series analyzes foreign reaction to the US election and explores how President-elect Barack Hussein Obama is likely to respond to the global expectations from his presidency. In the first article of the series, journalist and author Bruce Stokes details how the world pulsates with new urgency to solve a long list of global problems: ending war in Iraq, closing the prison at Guantanamo Bay, developing alternative-energy sources and slowing climate change, settling the Israeli-Palestinian conflict, promoting trade without destroying the environment or human rights, and developing international regulations that might prevent financial crisis like the one that brought the world to the brink of a meltdown. Of course, Americans and foreign onlookers do not agree on priorities or strategies, Stokes notes, and finding the right balance between disparate domestic and foreign demands will test the new young leader. – YaleGlobal

The World Looks to Obama – Part I

But the new president will be preoccupied with challenges at home
Bruce Stokes
Wednesday, November 5, 2008 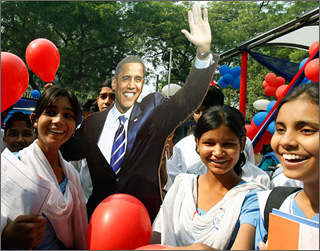 New dawn: Expectations from America rise as people all over the world, New Delhi above, celebrate the victory of Barack Obama.

WASHINGTON: Senator Barack Obama’s election as the next president of the United States promises a new era in America’s rocky relations with the world. But the era may be slow in dawning and President-elect Obama’s promised international initiatives – ramping up war in Afghanistan, curbing global warming – may not work out quite the way America’s allies hope.

The urgent economic challenge at home will constrain and shape Obama’s initial dealings with foreign leaders. In spring 2008, pluralities of the public in 16 of 23 countries surveyed by the Pew Global Attitudes Project thought the US had a negative influence on their domestic economy. Following the Bush administration’s mishandling of the September Lehman Brothers collapse and thanks to the global economy’s downward spiral into recession, majorities around the world now undoubtedly blame America for their economic woes, for good reason. 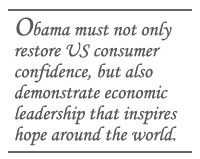 Thus Obama must not only restore US consumer confidence, as Franklin Roosevelt tried in the 1930s, but also demonstrate economic leadership that inspires hope around the world, an unprecedented challenge. During the campaign, Obama was largely silent about how he would deal with the international aspect of the financial crisis. There are no American votes to be gained by pledging to remake the International Monetary Fund or to coordinate with other governments on interest-rate cuts and new government spending.

A first challenge is following through on the November 15th economic summit hosted by President George Bush. Going forward, Obama must balance giving greater authority to the newly-wealthy China and oil-producing states, whose money is needed to bail out the financial system, with Americans and Europeans reluctant to relinquish their waning political influence and tarnished market-based economic principles. The new president must demonstrate an ability to forge new international consensus without appearing to sacrifice US sovereignty. Squaring that circle will not be easy.

Leading that effort will be Obama’s new secretary of the Treasury. Washington insiders think it could be Timothy Geithner, head of the New York Federal Reserve Bank. Hardly a household name, Geithner is trusted on Wall Street, deeply involved in the US bailout of financial firms and, most important, as a public servant, has no blood on his hands from the recent banking collapse.

Obama’s second unexpected foreign policy challenge is American public opinion, which lately turned sharply against international engagement on a range of issues that American voters once supported and on which foreign publics expect action. 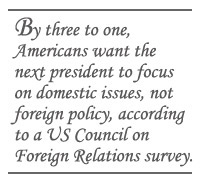 By three to one, Americans want the next president to focus on domestic issues, not foreign policy, according to a September survey by the US Council on Foreign Relations. Fewer Americans than at any point in this decade assign high priority to preventing genocide (one in three favor such action), strengthening the United Nations (one in three), promoting and defending human rights (one in four) and reducing global spread of AIDS and other infectious diseases (one in two).

Obama must sell international engagement to Americans. His likely secretary of state, who many believe will be Senator John Kerry, the Democrat’s 2004 presidential candidate, lacks sufficient stature to make this sale on his own. With the bully pulpit of the White House, presidential leadership can turn public opinion. But even with the deference accorded any new president, Obama will only have so much political capital to spend on foreign-policy concerns given domestic economic challenges.

Disengagement from Iraq had long been expected to be Obama’s principal foreign-policy challenge. He pledged to pull most US troops from Iraq within 16 months, and in mid-October seven in 10 American voters said withdrawal was very important to them.

But this timetable may prove beyond Obama’s control. If American casualties increase in the months ahead, Obama will face demands from a war-weary, economically-strapped electorate to cut and run, even as America’s Middle Eastern and European allies fret about regional instability.

Afghanistan may prove a greater thorn in Obama’s side. He has pledged to step up the war there. And three in five Americans want to keep US troops in Afghanistan, according to the Pew Global Attitudes project. But majorities in France, Germany, Spain, Poland and Turkey – all NATO members with troops stationed in Afghanistan – want their forces to come home. In the last days of the campaign, Obama emphasized economic reconstruction in Afghanistan and non-military solutions, a recognition that his administration must accommodate Europeans’ sensibilities if the allied effort is to continue there. US Secretary of Defense Robert Gates is respected by NATO allies, and his reappointment, widely expected in Washington, may ease some anticipated frictions over Afghanistan. But fundamental differences between the allies over goals and tactics in Afghanistan will bedevil the Obama administration.

The Middle East is another problem area. Obama roundly criticized the Bush administration’s failure to pursue settlement of the Israeli-Palestinian issue. And Europeans believe this issue must be an Obama priority. Dennis Ross, president Clinton’s regional peace negotiator, is expected to have a senior role in the Obama State Department and will inject new energy into the effort. But Obama must walk a fine line with conservative Jews in the US who will attack the Obama administration for any perceived “sellout” of Israel and whose support Obama needs for many domestic- policy initiatives.

Obama inherits a country with a profound image problem, with only eight of 23 countries surveyed by Pew this spring have a favorable opinion of the US.

The new president has support for improving America’s image. About half of Americans acknowledge that the Bush-era decline in American standing abroad has been a major problem.

But there’s less public support for the foreign-policy initiatives that would likely win greater US favor abroad. Imprisonment of alleged Muslim extremists at Guantanamo Bay is an odious symbol of the Bush administration’s abuse of human rights, and Obama has promised to close the prison. But nearly half of Americans believe that Washington’s policies toward the prisoners at Guantanamo are fair. So there’s no groundswell of public support for quick action on Guantanamo that’s expected abroad.

Similarly, US inaction on climate change has been a black eye for US, especially in Europe. Obama promised to reverse course, join international climate initiatives and institute a carbon trading regime. But only one in four Americans think action to slow global warming is a “very important” issue. The Obama administration will move slower on climate change than Europeans and others would like.

Trade is also a higher priority for foreigners than it’s likely to be for the Obama administration. Imports and exports are more critical for the US economy than ever before. Nevertheless, US public support for trade has fallen dramatically. And Obama was more critical of trade than any Democratic general election candidate for US president in the last two decades. The next US trade representative – possibly Daniel Tarullo, a former Clinton Administration official – will not necessarily pursue protectionist policies. But he or she is likely to be tougher on US trade partners than recent holders of that office.

Whereas a year ago Iraq and terrorism might have been expected to dominate the international agenda of next president and his team, now it’s the economy, the threat of America turning inward and unrealistic foreign expectations of this young African-American. Obama has promised hope and change. The campaign pledge may prove hard to deliver on the world stage.

Bruce Stokes is the co-author of the book “America Against the World” published by Times Books.