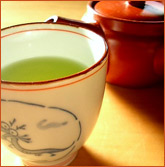 When you pour that lightly colored brew in your cup and lift that aromatic drink to your lips, it’s hard to imagine that you are continuing a 5,000-year-old practice. Tea is indeed one of the oldest drinks in history. The tortuous long path that tea has taken from China to reach the cup in your hand parallels the twists and turns taken by the early processes of globalization.

This legendary drink is reputed to have been first discovered by mistake - 5000 years ago, the Emperor of China found tea leaves in his pot of boiling water. Known for his scientific curiosity, he proceeded to taste the drink - and loved it. Before long, tea became a staple of Chinese culture. By 800 AD a Zen Buddhist priest had already written a comprehensive history of its use. Tea was adopted into various religious and meditative services by Zen Buddhists, who suggested that the substance enhanced spiritual concentration.

Buddhist missionaries to Japan brought the drink with them as an essential part of their practice. 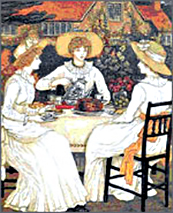 In the continuing evolution of the tea myth, some Indian and Japanese Buddhists later used the drink to tell the story of Buddha. In their version, Buddha awoke after five years of a seven-year meditation, sat in the shadow of a wild tea tree and the leaves to revive himself. Soon after its introduction, the Japanese created an entire culture around tea with the Tea Ceremony or “Cha-no-yu” - meaning literally “hot water for tea.” The ritualized pouring and serving of tea by geisha hostesses became a mark of grace. The Irish-Greek journalist-historian Lafcadio Hearn, among the few foreigners to gain Japanese citizenship at the time, witnessed the practice and wrote extensively about the years it took to master the complex art form. The original Zen Buddhist element was lost as “tea competitions” became popular among nobles who would win jewels or armor for guessing a particular tea blend. In the 1300s, Buddhist monks tried a campaign to bring tea back to its original Zen roots, but to no avail.

As European trade with China and Japan increased, rumors of this new substance began to filter back with the caravans. No traders could quite describe how tea was produced: Suggestions were as outlandish as that the leaves be boiled, salted, buttered and eaten whole. It was not until 1560 - when Portuguese missionaries established a trade route with China - that tea was imported to Europe, by way of Portugal and later the Netherlands. This account is contested, however, by those who claim that Arab traders gave tea to the Venetians one year earlier. The early few shipments were expensive; serving the drink was a sign of wealth, thus increasing tea’s popularity among Dutch elites.

Not everyone was willing to embrace the new beverage. Doctors and scholars, known as “tea heretics” questioned if the dark, bitter substance was good for public consumption, and academic debates raged for decades. Falling prices led to mass consumption by the late 1600s. Despite the dire predictions, tea made with boiled water actually offered health benefits over alcohol consumption for Europe.

Britain was a late coming to the tea trade; it was introduced in London in 1652, the same year as coffee and cocoa. By 1700, the British were already importing more than 240,000 pounds of tea. The heaviness of British cuisine - breakfast was ale and beef and dinner not much healthier - made the refreshment of an “afternoon tea”, often accompanied by baked goods, a pleasant addition to the British way of life.

The British trading companies became the most famous among European tea importers, partially because of the pivotal role the East India Trading Company played in the expansion of the British Empire into India. A new language developed in this trading business in which the Portuguese, British, Indian and Chinese trading partners could communicate - “pidgin English” allowed partners to share such terms like “chow”  or “cash,” still used by English speakers today.

Still, the trading partners did not enjoy a cooperative relationship. Claiming that local political instability was disruptive to business interests, the India Company gradually took over India’s coastlines while also pushing out Dutch and French competitors and forced local workers to produce opium, which could be sold to China in exchange for tea. This British avoided having to spend British coinage on tea and kept the exchange of capital within their empire. The trade of opium for tea led to the Opium Wars in the early 1800s, during which the British effectively wiped out resistance to their domination of the tea trade.

In the latter half of the 19th century, tea began to play a crucial role in various social movements in Europe and America. One woman who managed a bread shop in England convinced her supervisors to allow her to serve tea to favorite customers along with their purchases. The shop set up some tables in 1864, and women quickly vied to drink tea at the location. Such tea shops were an early venue for unchaperoned women to meet friends and may have contributed to women’s emancipation. Likewise, tea was often the only non-alcoholic beverage choice at inns, making it a favorite of prohibitionists - thus, the name “teetotaler” for those who abstained from alcohol.

Across the Atlantic, Americans also contributed to the development of tea, introducing in “iced tea” at the 1904 World’s Fair in St. Louis and tea bags in 1908 to speed preparation.

Nowadays, tea comes in many varieties including green, black and oolong. While Europeans and Americans have traditionally favored black teas, green teas promise health benefits, including increasing metabolism and reducing risk of cancer.

Rights: © Copyright 2004 Yale Center for the Study of Globalization