After centuries of conflict over religion and sovereignty, Ireland and Britain agreed to an Irish Free State in 1921 with the Republic of Ireland founded in 1937. Britain and Ireland joined the European Community in 1973 though tensions did not end. “The Good Friday Agreement that ended the troubles on 10 April 1998, while formally abandoning the Republic’s historic claim to Northern Ireland, also enshrined the principle that the people of both parts of Ireland have the right, without external interference, to solve their remaining disputes by mutual consent,” explains Jolyon Howorth, visiting professor at the Harvard Kennedy School. “An enduring consequence of that agreement was the progressive elimination of the border. The 2005 implementation of the ‘four freedoms’ of the European Union’s Single Market – free movement of goods, capital, services and people – underpinned the peace process.” A hard Brexit border between the Republic of Ireland and the UK’s Northern Ireland threatens peace. The European Union does not trust the shenanigans that Brexit hardliners might try with a soft border after a bitter campaign, many falsehoods and contentious negotiations. Hard Brexit is a mad rush into uncertainty, and mishandling could lead to breakup of the United Kingdom. – YaleGlobal

CAMBRIDGE, MASSACHUSETTS:  The British Empire systematized divide and rule. A century later, that policy threatens the United Kingdom itself. The hard Brexit pursued by Prime Minister Theresa May risks reopening the conflicts that wracked Northern Ireland for decades. The price of avoiding more bloodshed may require opting for a softer form of Brexit.

The partition of Ireland in 1920 followed purely sectarian lines. The historic region of Ulster comprises nine counties: Three with Catholic majorities merged into the independent Republic of Ireland and six with Protestant majorities became Northern Ireland, an integral part of the United Kingdom. Conflict known as the “Troubles” wracked the province between 1969 and 1998, pitting Nationalists seeking unification with the Republic against Unionists wedded to the UK, claiming more than 3,500 lives. The 500-kilometer border between the two Irelands became the most militarized zone in Europe west of the Iron Curtain. 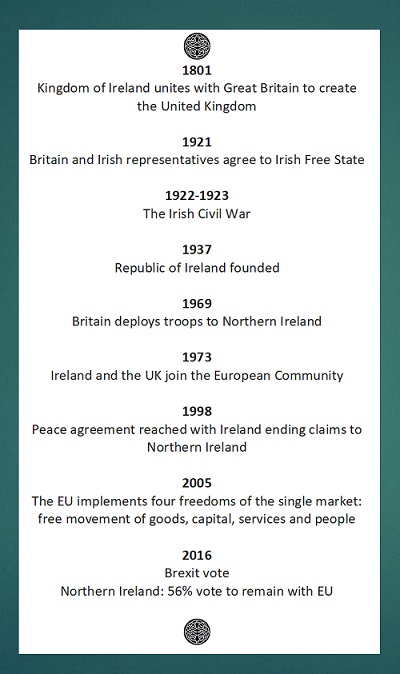 The Good Friday Agreement that ended the troubles on 10 April 1998, while formally abandoning the Republic’s historic claim to Northern Ireland, also enshrined the principle that the people of both parts of Ireland have the right, without external interference, to solve their remaining disputes by mutual consent. An enduring consequence of that agreement was the progressive elimination of the border. The 2005 implementation of the “four freedoms” of the European Union’s Single Market – free movement of goods, capital, services and people – underpinned the peace process.

Brexit threatens to overturn two decades of peace. While the United Kingdom as a whole voted narrowly, by 51.9 percent, to leave the European Union, the people of Northern Ireland voted by 56 percent to Remain. Maintenance of peace across the province was a primary motivation behind that vote. However, May’s decision to pursue a “hard Brexit,” involving departure from both the EU’s single market and the customs union, posed the border issue in starkest terms. If the United Kingdom quits the European Union and the Republic of Ireland remains a member, then the border between the two Irelands becomes, by definition, a “hard border” requiring customs checks and inspections. There is simply no way round this harsh reality.

Attempts to find a solution during the two years of negotiation between the UK and the EU failed utterly. That is why the so-called “Irish backstop” was incorporated into the Withdrawal Agreement signed between London and Brussels on 14 November 2018. Put simply, the backstop is a “safety net” agreement – following the UK’s scheduled exit from the EU on 29 March, both Northern Ireland and the UK will remain in the customs union, and Northern Ireland will remain in the single market for goods until “alternative arrangements” satisfactory to all parties have been agreed. This is an open-ended arrangement with no time limit. Both London and Brussels see the backstop as a temporary measure, but to avoid becoming permanent, they must negotiate those elusive “alternative arrangements.”

Tory Brexiteers have brandished many proposals to solve the problem, including the so-called “maximum facilitation model” based on high-technology digitalized checks and other invisible gizmos, trusted trader schemes, number-plate recognition and even the use of drones to avoid an actual border. The EU has examined these fanciful schemes and rejected them as unworkable. For Tory Brexiteers, as well as for the 10 members of parliament from Northern Ireland’s Democratic Unionist Party propping up May’s minority in the House of Commons, the backstop is anathema. Without “alternative arrangements,” the UK will be permanently wedded to the customs union, thus incapable of signing bilateral trade agreements with third countries – the entire purpose of Brexit, in their eyes.

That is why, when May put her “deal” to a vote on 15 January, the Commons rejected it by 230 votes, 432 to 202, the biggest majority against a government bill in UK parliamentary history.

There are three distinct dimensions to the Irish border issue. For most Tory politicians and May, the problem is essentially legalistic, a means of finding a technical fix to a problem not anticipated during the referendum campaign. Brexiteers have dismissed the problem as a non-issue, Boris Johnson having outrageously opined that the Irish border was no more real an issue than the separation between two London boroughs. Thus, for Westminster, the backstop is largely a distraction preventing implementation of a hard Brexit.

For the Irish government and the people of both parts of that divided island, the border is about relations between communities, about history, geography and culture, peace and reconciliation and, ultimately about symbols and identity. The border is an existential threat hovering over an entire people.

The basic problem for the EU is the sanctity of the single market. Given the rhetoric of Brexiteers, Brussels must assume that the United Kingdom’s intention is to develop an economy and a market with very different regulatory and normative underpinnings from those of the EU. The UK aims to become a deregulated, flexible, low-standard labor market economy, potentially a tax haven for overseas investors and an unfair competitor to the EU.  Under such circumstances, the only land border between the two places requires serious customs checks and inspections. Otherwise, the UK could fundamentally undermine the regulatory and normative framework of the single market, with sentiments captured in an assessment from a donor behind the Leave campaign: “Brexit was a war. We won.” That is why, for Brussels, the backstop is non-negotiable.

On 29 January, The House of Commons passed the so-called “Brady amendment,” supported by May’s government. Members of parliament voted by a narrow majority to instruct May to return to Brussels to pin down those “alternative arrangements” and avoid installation of a hard border in Ireland. This has merely exacerbated the problem. Those voting in favor of this amendment, including its sponsor, Graham Brady, refused to specify what “alternative arrangements” they had in mind. However, the very fact that May had finally engineered a majority in favor of something unleashed a mood of triumphalism among Brexiteers, many of whom argued that the EU would now be obliged to pay attention to the will of Westminster.

May traveled to Brussels on February 7 and to Dublin the next day. She had nothing new to propose other than that the EU take note of the House of Commons’ vote. She met with unbending determination on the part of the EU and Irish leadership not to reopen the backstop issue. European Council President Donald Tusk greeted her arrival with a speech, including the comment: "I've been wondering what that special place in hell looks like, for those who promoted Brexit, without even a sketch of a plan how to carry it out safely."

The EU finds itself facing two almost equally awful alternatives: a no-deal Brexit or a porous border between the future UK and the EU. Under those circumstances, there is little doubt that, although terrible for everybody, the EU will choose the no-deal Brexit, if that is May’s intention.

As seen from Europe, the UK’s party politics is the sole driver of the Brexit process. May can stay on as prime minister only if she keeps the Conservative Party united. Jeremy Corbyn, the Labour leader, can hope to become prime minister only if he keeps the Labour Party united. Brexit profoundly divides both parties, with Brexit “policies” of both leaders exclusively geared to an attempt – probably vain – to avoid splitting the ranks. For many analysts, both parties are sacrificing, on the altar of fictitious party unity, the future of the country they claim to lead. The Irish people risk becoming massive collateral damage in this incomprehensible endeavor.

Jolyon Howorth is a visiting professor of public policy with the Harvard Kennedy School. He was a visiting professor of political science and international affairs at Yale University since 2002. He is professor emeritus of European politics at the University of Bath, United Kingdom, and visiting professor at Luiss Universitá Guido Carli, Rome. His recent publications include Security and Defense Policy in the European Union (second edition, 2014) and Defending Europe: The EU, NATO and the Quest for European Autonomy (edited with J. Keeler, 2003). Howorth is currently studying power transition in the contemporary world.

EU-UK Agreement Kicks Brexit Can Down the Road

Copyright © 2018 YaleGlobal and the MacMillan Center