Rejecting concerns about press freedom, the Trump administration has designated five Chinese media entities as foreign government functionaries. The action comes at the heels of a trade war and scrutiny of Chinese involvement in education, research and telecommunication. Five news outlets will be required to report staff names, personal details, property holdings and US staff turnover under the Foreign Missions Act, according to the New York Times: “Enacted in 1982, the law is a legal tool intended to ensure equitable treatment for American diplomats serving in countries around the world, often under onerous government restrictions. It deals with such things as providing visas, acquiring property and extending diplomatic immunity in matters of criminal wrongdoing.” Xinhua, CGTN, China Radio, China Daily and The People’s Daily are among China’s most popular media. US State Department officials suggest the goal is to confront Chinese lobbying efforts, influence and intelligence operations in the United States. The article briefly compares media activities of Russia and China: The former sows distrust in democracy; the latter tends to praise China’s economic and social achievements. China experts allege that state media propaganda also cover up human rights abuses. Other analysts warn that China could retaliate against US journalists. – YaleGlobal

Read the article from the New York Times about the US State Department naming five Chinese media outlets as government entities.

Steven Lee Myers is the Beijing bureau chief for The New York Times. He joined The Times in 1989 and has previously worked as a correspondent in Moscow, Baghdad and Washington. He is the author of The New Tsar: The Rise and Reign of Vladimir Putin, published by Alfred A. Knopf in 2015. 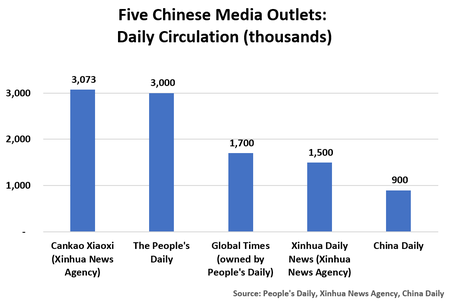