Businesses and societies depend on economic growth for jobs, investment and savings. Globalization – including the flow of images of personal behavior, cultural diversity and emphasis on healthy lifestyles – may be pushing the alcohol industry into decline with as much as half the world reporting not drinking at all for religious, cultural or economic reasons in 2018. Drinking alcohol starts early in the Americas, Europe and western Pacific, according to the World Health Organization. Michael Skapinker reports on patterns identified by the United Kingdom Office of Statistics between 2005 and 2018: More than 22 percent of 16- to 24-year olds reported not drinking, up from 19 percent; more than 20 percent of 25- to 44-year-olds reported not drinking, up from 15.5 percent; about 24 percent of those over 65 reported not drinking, a fall from 29.4 percent in 2005. Among those who do drink alcohol, binging is more common. Social pressure to drink or not to drink can work in both directions, and a growth area for the industry could be in non-alcoholic beverages. – YaleGlobal

Globalization – due to concerns about health or images of embarrassing behavior – may push drinking alcohol into decline, though binge drinking is still common
Michael Skapinker
Tuesday, August 13, 2019

Read the article from the Financial Times about global alcohol consumption as reported by the World Health Organization.

Michael Skapinker is a contributing editor for Financial Times. 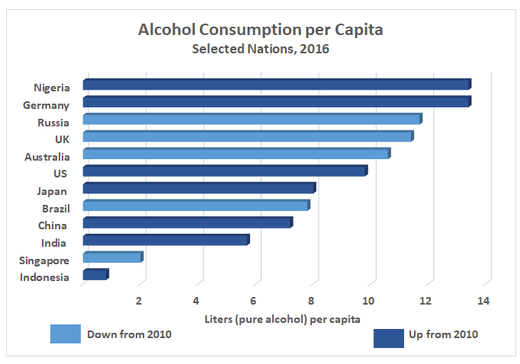 The Conversation: Big Alcohol Is Poised to Expand Into Africa