Images of long lines at the summit of Mount Everest and stories of climbers, desperate for air, stepping over the bodies of others who succumbed, are a public relations disaster. Reaching the summit, what should be a glorious achievement, has become another garish display of human excess. Some blame Nepal for selling too many permits. Others complain about rude behavior. At least 11 people have died, and Nepal considers “requiring all climbers to submit proof of mountaineering experience and a verifiable certificate of good health,” reports the New York Times. “The path to the top is so narrow and steep, climbers had to step precariously around others who had fallen ill or died. Some apparently ran out of bottled oxygen, partly because of the crowd of climbers…. That caused delays, with climbers forced to wait in the snow for hours, at heights of more than 28,000 feet.” There are also reports of climbers who were poorly prepared and others refusing to share supplies of air or water. The article also raises the potential for corruption from guides, evacuation services, insurers and others in Nepal’s climbing industry. Nepal is a poor nation with GDP per capita at about $900. Tourism’s contribution to Nepal’s GDP has been on decline. – YaleGlobal

Nepal considers changing rules for scaling Everest, but long lines and deaths spoil the grandeur, reducing the achievement to another tawdry tourist attraction
Bhadra Sharma and Jeffrey Gettleman
Wednesday, May 29, 2019

Read the article from the New York Times about the long lines for climbing Mount Everest. 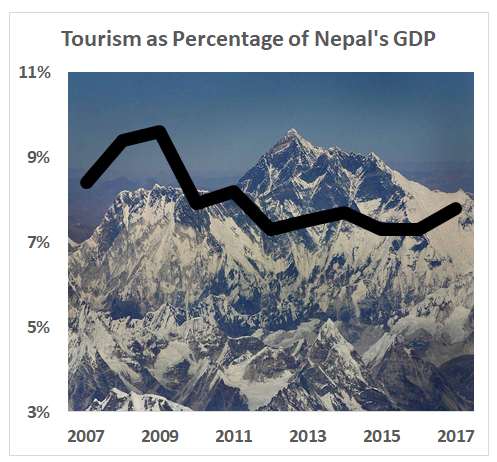 Decline: Tourism as a percentage of Nepal’s GDP has fallen from more than 12 percent in 1996  (Source: Knoema, data; Leoboudv, photo)