India banned the sale of electronic cigarettes and warned of an “epidemic” among youth. India and China, emerging economies with more than 1 billion people, represent the largest potential markets. “The ban cuts off a huge future market from e-cigarette makers at a time when the number of people smoking worldwide is declining,” reports Reuters. “The ban also covers the production, import and advertising of e-cigarettes - but not the use of them. It comes at a time when vaping is facing increased scrutiny in other countries.” Health officials express concern about flavors, mixtures of chemicals and unregulated products. India has 106 million smokers, second to China. Other countries may follow suit. The United States has reported eight deaths and numerous hospitalizations for respiratory illness among young adults who vape. Multiple jurisdictions in the US have banned sales of flavored cigarettes. In the global smoking market, cigarette sales dominate, totaling more than $713 billion in 2018, almost fifty times the $15.7 billion for vaping. Vaping supporters contend that the practice helps wean smokers from cigarettes, while health experts suggest the product contributes to nicotine addiction. Health officials also warn about the long-term effects on lungs. More than 900,000 Indians die each year due to tobacco-related illnesses. – YaleGlobal

Read the article from Reuters about India’s ban on sales of e-cigarettes. People can still use the product though. 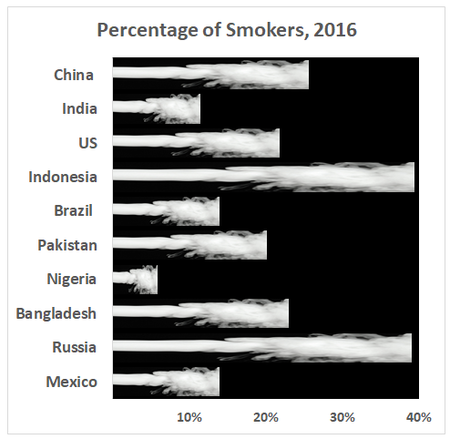 Percentage of smokers in most populous nations - Indonesia is the only nation where the percentage is rising (Source: WorldinData and World Bank)