Global recessions are rare, but the world may have dodged one in 2019. The world posted GDP growth of 2.9 percent that year, far below the average 3.5 percent posted since 1980. Deviations from the trend signal a warning even for strong economies and corporations, suggests economist Stephen S. Roach with Yale University. “Unlike individual economies, which normally contract in an outright recession, that is rarely the case for the world as a whole,” he writes. During typical recessions, half of all national economies contract; during 2009, the worst downturn since the 1930s, three quarters of national economies contracted. “For global business-cycle analysts, the 2.5-3.5% growth band is considered the danger zone.” Such low growth leaves little cushion to absorb shocks, including wars, natural disasters or a global pandemic. Trade growth – another way to cushion against shocks – slowed to 1 percent in 2019. Roach concludes by expressing skepticism about the optimistic view held by financial markets of global economic prospects. – YaleGlobal

Read the article from Project Syndicate about low global economic growth posted for 2019 and the connection with global trade.

Stephen S. Roach, a faculty member at Yale University and former Chairman of Morgan Stanley Asia, is the author of Unbalanced: The Codependency of America and China. 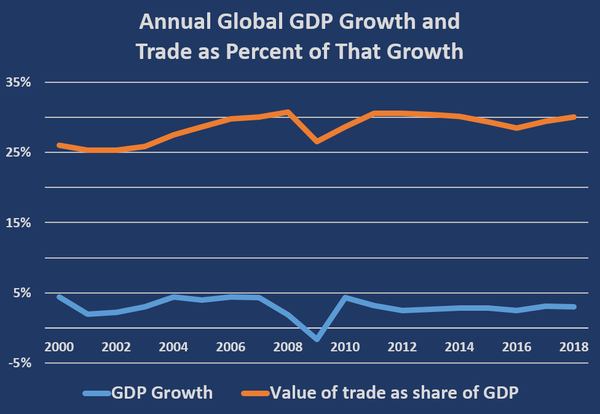 The World Is Stuck With Persistent Stagnation