A Houston Rocket basketball executive tweeted support for the Hong Kong protests in October, upsetting the close relationship between China and NBA. The fallout could result in a financial hit for NBA. The NBA commissioner suggests the loss may reach $400 billion in response to speculation that the total could be $1 billion. Disturbed by the NBA’s support for free speech, China stopped broadcasting the games on state-run channels and its official distribution partner, Tencent. The response pushed the NBA and its commissioner to choose between defending free speech rights and development of its most profitable foreign market, perhaps the league’s greatest crisis in recent years. Even as NBA officials endeavor for diplomatic ways to restore their business ties with China, the outbreak of the novel coronavirus adds complications, consuming the attention of China’s government and making NBA ties a low priority. China’s tough response on COVID-19 represents a lost opportunity for the NBA with millions of people under quarantine at home and eager for news and entertainment. The league must consider steps to contain the financial loss. – YaleGlobal

Read the article from The Wall Street Journal about the financial impact of China’s ongoing block on NBA games.

Ben Cohen is a sports reporter for The Wall Street Journal in New York covering the NBA, college basketball and college football, among other sports. 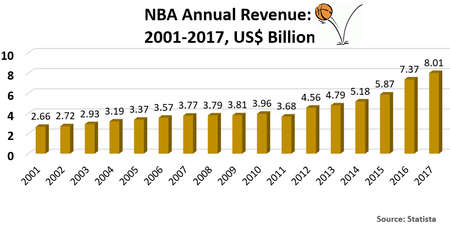 China’s break with the NBA since October 2019 could mean the loss of $400 million revenue by some estimates (Source: Statista)

Fighting Words: US and China Clash on Free Speech