OPEC to Russia – It’s Over: OilPrice.com

A meeting between OPEC and non-OPC members, more than 20 nations in all, resulted in no deal to cut oil production in order to boost prices. “OPEC and the Coronavirus have been pressuring Russia for weeks as oil prices have tumbled to sub-$50 per barrel, but Russia has so far decided it doesn’t want to participate in further production cuts to offset the loss in demand,” reports Julianne Geiger for Oilprice.com. “After OPEC so brazenly decided on collective OPEC+ cuts of 1.5 million bpd without Russia’s input or blessing, the oil cartel – that used to be able to go it alone when it comes to manipulating markets – decided the non-OPEC members would need to cut 500,000 bpd of that." She goes on to explain that Russia is the largest producer in the non-OPEC group and refused new cuts, but did agree to rolling current cuts to the next quarter. Parties agree that talks will continue. UPDATE: Saudi Arabia, with low costs in producing oil, boosted production and reduced global prices. – YaleGlobal

OPEC to Russia – It’s Over: OilPrice.com

OPEC nations met with non-OPEC producers, including Russia and could not agree to oil production cuts that would prop up prices
Julianne Geiger
Sunday, March 8, 2020

Read the article from OilPrice.com about OPEC and non-OPEC nations failing to agree on production cuts.

Julianne Geiger is a veteran editor, writer and researcher for Oilprice.com, and a member of the Creative Professionals Networking Group. 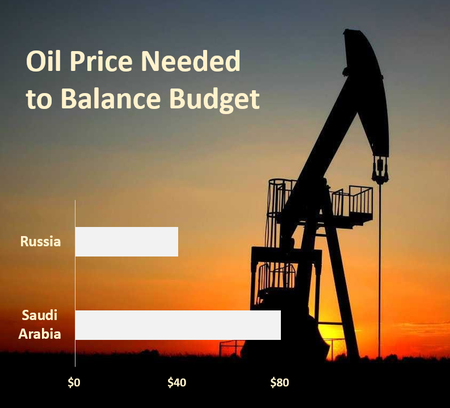 Russian failed to warn The Kingdom of Saudi Arabia about the attack by the 13,000 Houthi tribesmen in the employee of Iran and Libya before the Chinese put their candidate in the leadership of Angola. China moved their chess pieces to early. Putin was also skimming funds off of the $200 billion Libyan oil fund with Italian despot Berlesconi, who is now banned for life from Italian politics.