The World Economic Forum at Davos attracts world leaders, CEOs and celebrities every January to discuss economic trends. Despite some pessimistic forecasts on economic growth, the CEOs attending the 2020 forum remain optimistic about global economy for the most part, with the United States and China having signed phase one of a trade deal - offering greater certainty for economies. In addition, the United States also reached a deal with Canada and Mexico to replace the North American Free Trade Agreement, and France delayed imposition of digital tax on big technology companies, most headquartered in the United States. US President Donald Trump attended the forum, one of many signs of tempered trade tensions. Still, business leaders express concern about implementation of trade agreements. Likewise, the 2020 presidential campaign could complicate trade matters. Another challenge for CEOs: increasing attention from investors and consumers on environmental and social responsibilities for corporations. – YaleGlobal

Multinational CEOs attending the World Economic Forum show optimism on the global economy due to some certainty provided by the US-China trade deal
Chip Cummins and Marie Beaudette
Tuesday, January 28, 2020

Read the article from the Wall Street Journal about business sentiment at the World Economic Forum.

Marie Beaudette is an editor on the Wall Street Journal’s deals team in New York. 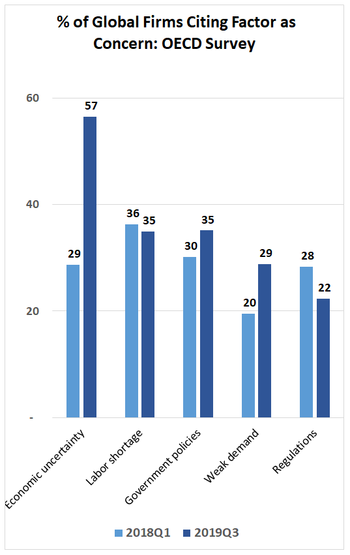 Uncertainty: A large percentage of senior business managers surveyed by the OECD expressed concern about economic uncertainty after the US-China trade war began in 2018, but that should subside with phase one of an agreement approved in mid-January (Source: OECD)