India’s capital city contends with severe pollution due to rising population, unchecked agriculture burning in nearby states and disregard for regulations. Delhi residents mourn how growth has contributed to a decline in quality of life: “the city has multiplied manifold, both in population, infrastructure and pollution-causing agents such as automobile, consumption of electricity and the use of air conditioners…,” explains Saket Suman for India Times, adding that low-cost suburbs have expanded outward as the city’s costs have risen. But regulations, including odd-even schemes for vehicles, have not worked. The city’s natural forests and waterways have vanished due to development, Saman continues. “Blame it on the prevalent corruption in Indian politics or the forces of globalization that helped in the emergence of multinational companies in the city, which in turn attracted migrants in huge numbers in anticipation of better prospects.” Basic resources like clean air and water have become luxuries. He suggests relocation of India's capital, but that won't reduce overall carbon emissions. Air pollution and climate change do not respect boundaries. – YaleGlobal

Read the article from India Times.

World coal production increased in 2017 by 3.3 percent and accounts for 27.1 percent of the world total energy supply, second behind oil at 32.6 percent, reports IEA Energy Atlas; for electricity production, coal represents the highest share at almost 40 percent ahead of renewable sources at about 25 percent and natural gas at 23 percent  (Source: IEA Energy Atlas and World Atlas) 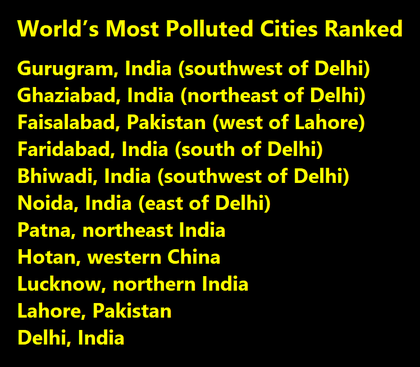 Many of the world’s most polluted cities are near Delhi (Source: AirVisual and Greenpeace, 2018) 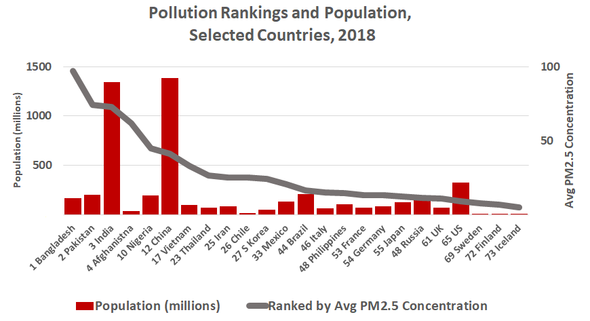 India is not the most polluted nation, and nations with the most air pollution, as compared by estimated average PM2.5 concentration are in Asia; not all places measure air pollution, 73 nations were ranked, and PM2.5 measures inhalable particles 2.5 microns or smaller  (Source: AirVisual and Greenpeace, 2018)