The war in Afghanistan has been underway since 2001, and confidential documents suggest that US officials hid evidence that the longest war in US history was unwinnable, reports Craig Whitlock for the Washington Post. Those documents entitled "Lessons Learned" were obtained after a three-year legal battle and include assessments from generals, diplomats, aid workers and Afghan officials, 428 in all, 95 of whom are named. “With a bluntness rarely expressed in public, the interviews lay bare pent-up complaints, frustrations and confessions, along with second-guessing and backbiting,” Whitlock writes. “The interviews also highlight the U.S. government’s botched attempts to curtail runaway corruption, build a competent Afghan army and police force, and put a dent in Afghanistan’s thriving opium trade.” Three US presidents with varying approaches presided over the war without success. The US State Department suggests that the document release could jeopardize peace talks with the Taliban. The war in Afghanistan has cost more than $2.5 trillion in all costs, with loss of life and injuries numbering in tens of thousands. – YaleGlobal

US officials repeatedly assured the public that they were making progress in Afghanistan but that was not true - and peace remains elusive
Craig Whitlock
Monday, December 9, 2019

Read the article from the Washington Post about documents criticizing progress in the US-led war in Afghanistan.

Read the documents and search via the tool at the end of the page. .

Craig Whitlock is an investigative reporter who specializes in national security issues. He has covered the Pentagon, served as the Berlin bureau chief and reported from more than 60 countries. He joined The Washington Post in 1998. 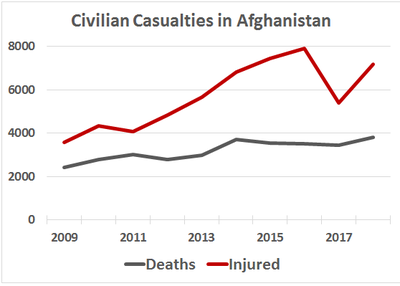 Progress? Some US officials suggest that civilian casualties is one benchmark for determining progress in the Afghanistan war – “If the number’s going up, you’re losing. If the number’s going down, you’re winning. It’s as simple as that,” suggested James Dobbins, former US diplomat, in 2009 (Source: UN Assistance Mission in Afghanistan)

The US and Afghanistan Ponder Next Steps

Impending US Pullout: Times of India