The US Senate voted to acquit President Donald Trump on two charges: abuse of power and obstruction of Congress. The vote was not completely along party lines. Multiple Republicans conceded that the president’s actions – urging Ukrainian officials to investigate a political rival and delaying the release of military aid – were wrong. Yet many also rationalized that no crime had been committed and voters should decide in November. Utah Senator Mitt Romney, the sole Republican finding Trump guilty of abuse of power, described it as a vote of conscience. “I take an oath before God as enormously consequential,” he said, adding he expects judgement form both party stalwarts and history. “What the president did was not perfect … it was a flagrant assault on our electoral rights, our national security and our fundamental values. Corrupting an election to keep one’s self in office is perhaps the most abusive and destructive violation of one’s oath of office that I can imagine.” He explained that he had wanted to hear testimony from former national security advisor John Bolton, hoping that context might allow reasonable doubt. Romney concluded, “We are all footnotes at best in the annals of history, but in the most powerful nation on earth, the nation conceived in liberty, that is distinction enough for any citizen.” Notably, Romney, the 2012 Republican presidential nominee, faced ridicule for naming Russia as the greatest security threat for the United States. – YaleGlobal

Read the text of Senator Mitt Romney’s February 5 speech before the US Senate.

Read about Mitt Romney describing Russia as a threat during the 2012 presidential debate. 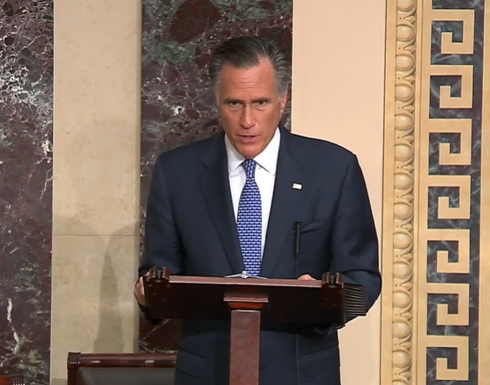 A total of 67 votes were requried for conviction.

They needed 67 votes, not 51! Senate impeachment conviction requires a 2/3 majority, as per the Constitution.

Thank you! The word “close” was removed from the subtitle - and yes, 67 US Senate votes were required for conviction.