Case managers for the House of Representatives and the US president’s legal team present evidence on whether or not Donald Trump abused power and obstructed a congressional investigation into blocking military aid for Ukraine in exchange for an announcement into an investigation of a political rival. Trump blocked his staff from testifying, but multiple witnesses report such an exchange was his goal. A book draft from former National Security Advisor John Bolton confirms that Trump sought investigations into Joe Biden, democratic candidate for president, and his son Hunter, who served on a board of a Ukrainian gas company, reports the New York Times. Bolton sent drafts to the White House for a standard government review to prevent release of classified information, and the account implicates multiple officials. So far, arguments in the Senate impeachment trial appear to change few minds: Republicans support a rapid close to the trial while Democrats seek witnesses and documents. Another essay for the New York Times maintains that Chief Justice John Roberts, presiding over the trial, can decide to call witnesses. Trump’s defense team cites executive privilege to prevent such testimony, arguing that public releases could hamper presidents’ ability to do their job. A team of writers from Yale Law School, led by Harold Hongju Koh and writing for Just Security, argue that executive privilege does not apply to Bolton. – YaleGlobal 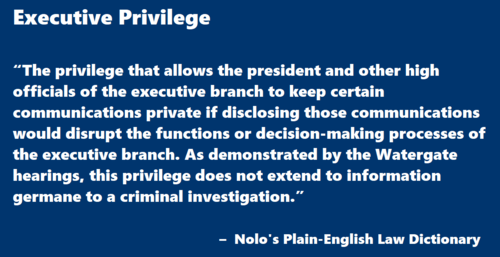 Read the article from the New York Times by Maggie Haberman and Michael S. Schmidt  about John Bolton’s book draft which is undergoing a security review by the White House: “Mr. Bolton would like to testify for several reasons, according to associates. He believes he has relevant information, and he has also expressed concern that if his account of the Ukraine affair emerges only after the trial, he will be accused of holding back to increase his book sales.”

Also read the essay from the New York Times “John Roberts Can Call Witnesses to Trump’s Trial. Will He?” by Neal K. Katyal, Joshua A. Geltzer and Mickey Edwards:

“…. the impeachment rules, like all trial systems, put a large thumb on the scale of issung subpoenas and place that power within the authority of the judge, in this case the chief justice. Most critically, it would take a two-thirds vote — not a majority — of the Senate to overrule that. This week, Democrats can and should ask the chief justice to issue subpoenas on his authority so that key witnesses of relevance like John Bolton and Mick Mulvaney appear in the Senate, and the Senate should subpoena all relevant documents as well.”

“First, judicial precedent does not condone the extension of executive privilege to former officials like Bolton in the context of a Senate impeachment trial. Second, Trump may not invoke national security privilege with respect to Bolton’s and others’ information regarding the president’s conversations with Ukrainian President Volodymyr Zelenskyy. Third, even if Trump could, any such claim of privilege has now likely been waived by the actions of the president, Bolton and others. Finally, this uncontroversial legal issue should not be litigated in courts. Chief Justice Roberts should simply cite the precedent detailed here to require the testimony as part of his judicial management of the impeachment trial.”

Trump’s Impeachment: What Comes Next?