Saudi Arabia’ confronts multiple challenges, including the Covid-19 pandemic, a decline in oil prices and flailing intervention in the Yemeni Civil War. The civil war began in 2014, and Saudi Arabia organized a coalition to intervene the next year, soon after Mohammed bin Salman became defense minister. Houthi rebels backed by Iran proved to be a tough adversary, and the war dragged on longer than bin Salman had expected. The war’s costs run high, and Saudi Arabia depends on its petroleum industry to fund government spending. In March, Saudi Arabia failed to reach agreement with Russia on oil production limits and, combined with pandemic shutdowns, this led to a drop in global oil prices. Complicating the war and Saudi efforts, separatists supported by the United Arab Emirates have declared self-rule. The international community worries about civilian deaths and the focus on Houthis allowing Al Qaeda in the Arabian Peninsula to strengthen. Saudi Arabia is short on funds and allies. Analyst Austin Bodetti concludes by outlining limited options for Saudi Arabia to end intervention in Yemen. – YaleGlobal

Short on funds and allies, Saudi Arabia struggles to end its intervention in the Yemen Civil War
Austin Bodetti
Thursday, May 28, 2020

CAPE CORAL: Because of the coronavirus, Saudi Arabia finds itself fighting a war on two fronts. In addition to the battle against the pandemic itself, the kingdom is wrestling with the devastation befalling the petroleum industry. Demand for fossil fuels has cratered with shutdowns and travel bans, and the oil reserves on which Saudi Arabia depends have lost much of their value, forcing the kingdom to the brink of a financial crisis. All the while, another self-imposed conflict continues: Saudi Arabia’s ill-fated intervention in the Yemeni Civil War.

Saudi Arabia first intervened in the civil war in 2015 – a year after the Houthis, a band of Iranian-backed rebels, captured the Yemeni capital of Sanaa. Saudi Crown Prince Mohammed bin Salman, who has become the nation’s supreme leader in all but name since his father ascended the throne five years ago, feared that Iran would use Yemen as a springboard to establish an anti-Saudi sphere of influence on the Arabian Peninsula.

The crown prince’s campaign began with grand ambitions, foremost among them ousting the Houthis from Sanaa and reinstalling Yemen’s beleaguered, Saudi-dependent government. Supported by Qatar, the United Arab Emirates and other influential allies in the Persian Gulf, Saudi-backed forces achieved key victories in their first year, recapturing Aden, Zinjibar and a crucial airport. The Royal Saudi Air Force and the UAE Air Force complemented the foot soldiers with a brutal demonstration of aerial warfare, carpet-bombing Yemen and killing hundreds of civilians. The conflict caused more than 100,000 deaths by 2019.

Despite initial victories, the intervention’s momentum faded fast. The Houthis proved more resilient foes than bin Salman had expected, blunting most Saudi offensives and holding Sanaa. Disputes between the Organization of the Petroleum-Exporting Countries, or OPEC, which Saudi Arabia more or less leads, and Russia – one of the most important players in the oil industry outside OPEC – provided an additional distraction. If Saudi Arabia failed to maintain control over the petroleum industry, bin Salman would lose the means to finance his war.

Other difficulties within Yemen emerged. An alliance of secessionists aligned with the Saudi campaign often undermined the message of territorial integrity coming from Yemeni officials, and militants massacred Houthis, Saudis and civilians alike.

To the international community, several of the Saudi-led coalition’s most persistent challenges looked self-inflicted. Emirati and Saudi generals’ all-encompassing focus on the Houthis enabled the Islamic State and Al Qaeda in the Arabian Peninsula, or AQAP, to flourish in Yemen. In the early years of the intervention, a lack of oversight led Saudi Arabia and the UAE to finance AQAP-aligned militias that happened to be fighting the Houthis. The 2016 move by Saudi Araba and UAE to boycott Qatar, one of the coalition's strongest member states, also compelled that peninsular monarchy to withdraw its troops from the coalition.

Though Saudi Arabia’s campaign in Yemen has stalled for some time, the coronavirus has given new impetus to the kingdom’s efforts to extricate itself from the Yemeni quagmire. Saudi Arabia initiated a two-week unilateral ceasefire on April 9, hoping to showcase the seriousness with which the kingdom greeted the pandemic. The Houthis, whom Saudi Arabia accused of violating the truce 241 times in 48 hours, express less enthusiasm. Even so, Saudi Arabia extended the ceasefire on April 24 as the Houthis rejected the measure.

While Saudi Arabia navigates a battlefield shaped by the coronavirus, the kingdom must negotiate with opponents over whom it has surrendered most of its leverage. Fast losing allies, Saudi officials have had to confront this challenge alone. The UAE withdrew most of its troops from Yemen last year, and Emirati forces have come into conflict with Yemenis allied with Saudi Arabia. An expanding number of American politicians also voice criticism of the operation. “American-built planes with American bombs were used by the Saudis to bomb a funeral procession in Yemen,” US Senator Rand Paul said. “We have an unfortunate habit of arming foreign nations, only to discover that these supposed allies may be creating more enemies for America than they are killing.”

The vast reserves of financial firepower on which Saudi Arabia has often relied to mitigate other quagmires is dwindling. The database Global Firepower ranks the kingdom as third in terms of military expenditure – after the United States and China – but 17th in strength. As the price of oil has slumped because of another conflict between OPEC and Russia, Saudi officials have had to burn through their foreign-exchange reserves to replace the sudden shortfall in income. Analysts predict that Saudi Arabia’s budget deficit could be more than $60 billion this year, restricting the kingdom’s ability to prosecute its brutal campaign in Yemen and compelling Saudi officials to abandon the operation, which has seen Saudi Arabia spend billions on weapons.

While the coronavirus has slowed Saudi activity in Yemen, the pandemic may have less of an effect on the conflict itself, which only grows more complicated. The Southern Transitional Council, an umbrella organization of Yemeni separatists that played a critical role in the Saudi war effort and received support from the UAE in particular, declared self-rule in late April. The announcement undermined the legitimacy of Yemen’s fragile, Saudi-backed government. Yemeni officials have vowed to fight the separatists, who remain close to the UAE. Now, bin Salman has a war within a war on his hands. 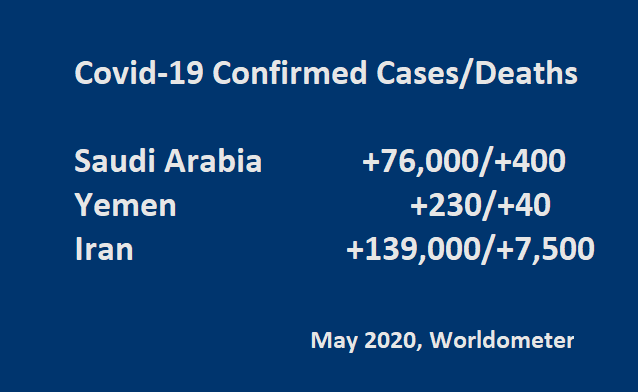 Saudi Arabia has called on the separatists to renounce their ambitious declaration of secession, but the kingdom, overwhelmed and under-resourced, has little leverage. UN officials, who have so far failed to ink a peace treaty between the Houthis and their Saudi opponents, have no hope of uniting the Saudi-reliant Yemeni government and its erstwhile secessionist allies. The United States, among the few countries with the diplomatic prowess to end the war, seems more preoccupied with fighting AQAP.

As allies become enemies in Yemen, the coronavirus continues to spread. Yemeni officials have described Aden, their provisional capital, as “infested.” For its part, the World Health Organization has suspended operations in Yemen. Iran and Saudi Arabia, regional powers most active in Yemen, encounter their own difficulties with the coronavirus, but their proxies show little sign of stopping the war.

The Houthis look as committed to their path as ever. The insurgents launched a barrage of ballistic missiles at the kingdom in March, firing another pair within Yemen in early May. As Saudi Arabia struggles with the fallout of a financial crisis, a pandemic and misadventure in Yemen, the Houthis likely recognize that the tide has turned in their favor.

To escape the Yemeni Civil War, bin Salman must pick from a short list of troubling options. His diplomats might scrap together a hasty peace treaty with the Houthis as the United States did during the Vietnam War, tying a diplomatic ribbon on a war that Saudi Arabia has in all likelihood lost. He might withdraw his troops altogether as the Soviet Union did at the end of the Soviet-Afghan War, hoping that his Yemeni proxies can hold their own against a tenacious enemy.

The more troublesome the Yemeni Civil War becomes, the more bin Salman might turn his ambitions inward. He has launched a variety of reforms to modernize Saudi Arabia and placate constituents. As the Saudi economy plummets, managing the kingdom’s internal affairs has gained that much more importance. The coronavirus has clarified the reality: The faster Saudi Arabia gets out of Yemen, the better for the crown prince and his flagging reputation at home and abroad.

Austin Bodetti studies the intersection of Islam, culture and politics in Africa and Asia. His research has appeared in The Daily Beast, USA Today, Vox and Wired.

China Plays NIMBY With the Taliban

Oman Strives for Neutrality in the Middle East

Covid oil crash should serve as a wake up call for Saudis as the country cannot keep living off its oil wealth for too long now.