The Taliban’s ongoing fierce attacks in Afghanistan have blocked efforts at peace. US and Taliban negotiators approach a deal. The conditions are minimal with a brief ceasefire. The Taliban expects US troops to withdraw troops and the US does not want Afghanistan to be used by transnational terrorists. The Taliban have demonstrated the extent to which they will fight for a state with Islamic features. The hope is for reduced violence for the next few weeks. “If the violence reduction deal falls apart, hopes for a peace process would probably shatter,” explains Laurel Miller for the New York Times. “Important as that will be, the expected agreement is not actually a peace deal. It is a chance to get one. The agreement will break the logjam of the Taliban’s longstanding unwillingness to sit in talks with the Afghan government and other Afghan power brokers without first achieving an American commitment to withdraw forces.” The agreement is only the start to a peace process, and talks could take a year or more. Miller points out a neutral mediator accepted by all sides is required who can convince parties on power-sharing and she warns that no deal will satisfy all parties. In separate news, President Ashraf Ghani was named winner of the September 28 presidential election. – YaleGlobal

The United States and the Taliban negotiated an agreement that could launch a peace process for Afghanistan, but human rights are in question
Laurel Miller
Wednesday, February 19, 2020

Read the article from the New York Times about the US and Taliban trying for an agreement to start a peace process for Afghanistan.

Laurel Miller is director of the Asia Program at the International Crisis. She was the United States’ deputy and then acting special representative for Afghanistan and Pakistan from 2013 to 2017.

Read about Ashraf Ghani winning a second term as president of Afghanistan from Stars and Stripes. 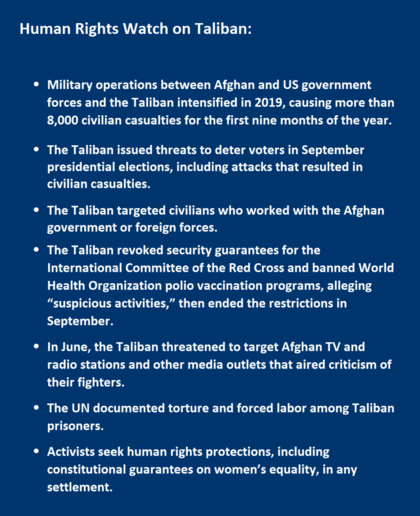 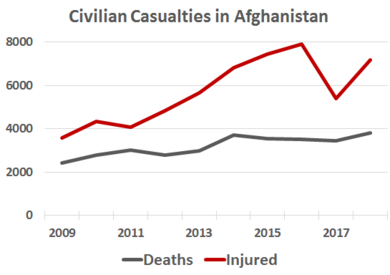 Some US officials have suggested one benchmark for determining progress in the Afghanistan is civilian casualties (Source: UN Assistance Mission in Afghanistan)